In a lead up to World Vegan Day on November 1, French plant-based bacon brand La Vie has covered the UK cities of London, Bristol, and Brighton with 2,000 pink billboards on bus shelters and subway and train stations. The billboards aim to humorously promote the new vegan bacon brand to Brits.

The billboards include phrases such as “Britain’s newest best faker. Sorry Boris,” and “Sure, our parents got the property boom, but we’ve got vegan bacon that tastes like bacon.” The marketing campaign comes just as the brand is being placed on retail shelves in the nation.

“With these adverts we are spreading our mission, the one that drives us: to help you switch to a more plant-based diet, one that’s better for the animals, better for the planet, and better for you,” La Vie says about the campaign. “All of this while having a big smile on your face because the bacon is award-winningly delicious and because hopefully our adverts will make you giggle on your way to work.”

The brand’s campaign is helping to set itself apart from traditional advertising competitors by embracing controversy and finding humorous ways to connect with consumers, whether they’re vegan or not. And La Vie appears to know how to get attention.

Earlier this year, the brand engaged in a week-long campaign to urge Burger King to add its vegan bacon to the Veggie Steakhouse, a plant-based remake of the chain’s meaty menu item.

It all started when a Burger King customer named Julien noticed that the Veggie Steakhouse failed to mimic the original by leaving off bacon entirely. “Sorry guys, I’m waiting for the Veggie Steakhouse with La Vie bacon,” he tweeted. La Vie responded with a clever campaign to convince Burger King to add its vegan bacon which included taking out a full-page ad in Paris newspaper Le Parisien to bring attention to this issue.

In addition to the ad, La Vie sent out its “Love Truck” to the Saint-Brice-sous-Forêt area where Burger King customers could bring their Veggie Steakhouse burgers to be doctored up with vegan bacon. After the campaign, Burger King obliged, saying it would add La Vie’s vegan bacon to its 550 locations across France.

But Burger King didn’t stop there. With a growing number of plant-based Burger King pop-ups opening around the world, the chain recently popped up in Bristol to serve 24 plant-based versions of classic menu items, including a Bakon King made with La Vie vegan bacon, until November 6.

The Parisian startup is working hard to make a positive impact on consumers’ eating habits by encouraging them to replace animal-based bacon with plant-based bacon, but it hasn’t been without struggle.

The French government—with the backing of local farmers and the country’s meat industry—is attempting to implement a labeling ban on the use of meaty terms such as “burger,” “bacon,” and “sausage” in the marketing of vegan products.

Recently, after being accused of being “unfair competition” by a French pork lobby, La Vie tried to fight back with a cheeky social media campaign. “The pork lobby has put us on notice for ‘unfair competition,’ because our vegetable lardons perfectly reproduce the ‘authentic’ pork lardons. Yes, they do. The nicest compliment in the world, with an acknowledgement of receipt as a bonus,” La Vie posted on its social media channels.

The brand went a step further by taking out an ad in Le Parisien to tell consumers.

“The pork lobby is attacking us because our veggie lardons are indistinguishable from pork lardons.” It continues: “Help us defend ourselves, by sending them this letter.”

Below a dotted line is a letter addressed to the pork lobby that reads: “Dear pork lobby: Thanks for the compliment. We think that your pork lardons are indistinguishable from our veggie lardons. Would you mind changing your recipe? Thanks.”

La Vie first launched in France in 2021 following three years of research and development and more than 5,000 recipe trials. Since then, the brand has not only won over distributors and restaurateurs, but also A-list celebrities such as Natalie Portman, who threw her support behind La Vie as an investor. 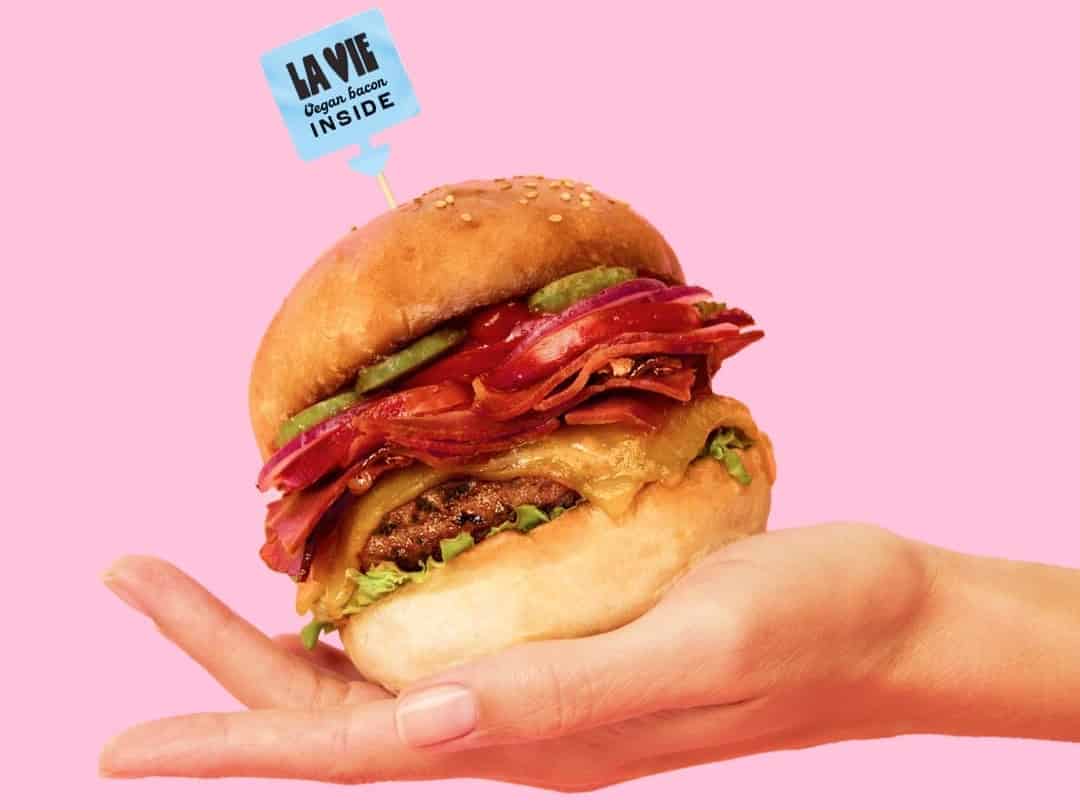 Earlier this year, La Vie raised €20 million ($21 million) in a funding round that it is using to expand its European distribution. Currently, consumers can find La Vie bacon and other products across the UK in Sainsbury’s, Waitrose, Whole Foods Market, and Planet Organic, along with several restaurant chains.

At the same time, La Vie is making its way to the shelves of French supermarket chains as well as other European countries like the Netherlands and Switzerland.

How to Lose Weight on a Plant-Based Diet

"I Gave Out Vegan Candy for Halloween. Here's What Happened"

This Brand is Making Butter Cheaper. Here’s Where to Find It